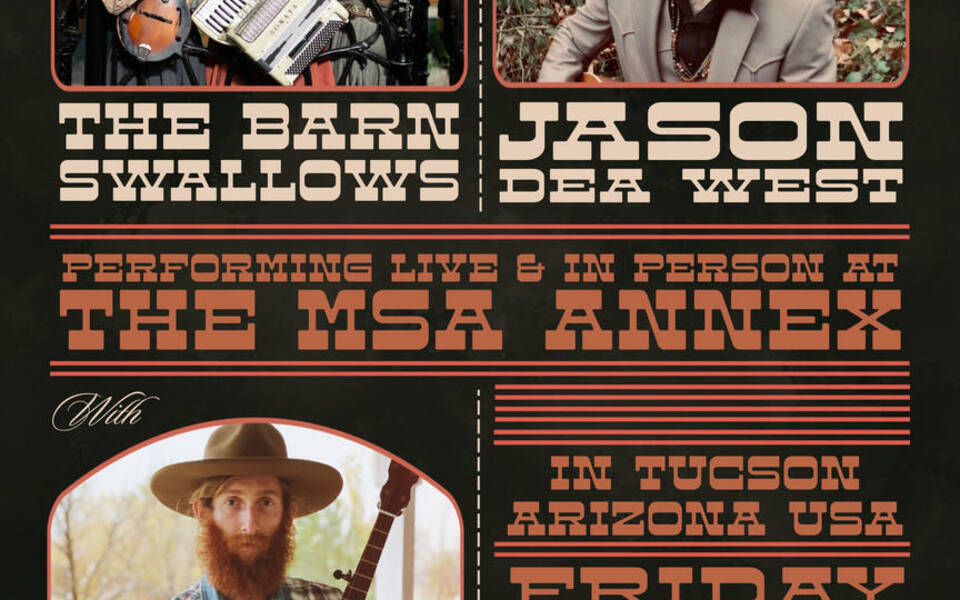 Join us for a classic Tucson December evening under the stars with firelight and an amazing evening of traditional Amerciana music. Jason Dea West, Charlie Marks and The Barn Swallows.

Jason Dea West:
American poet, songwriter and troubadour(Folk, country, western, traditional and alternative)
Jason Dea West is an American troubadour who sings what he lives and lives what he sings. Wests’ poignant lyrics are brilliantly blended with vintage country, folk and blues, and timely sensibilities. From epic guitar and harmonica instrumentals to humorous song as story, Jason never strays very far from the anarchic punk-folk roots of his beloved former band Barefoot Surrender and his celebrated current band Intuitive Compass.
Jason’s younger days as a busker and freight train hopper fostered his keen sense of road-inspired American musical history. Jason toured extensively with guest musicians and bands throughout the lower 48 States and Alaska, appearing in barn dances and taverns, theaters and music festivals, the circus and vaudeville circuits, on radio and in film.

Sad folk tunes, high & lonesome vocals, old-time banjo bangers, and a good story or two. Charlie Marks, based out of Reno, brings a raw and earnest energy to the stage that captivates. Charlie’s songwriting touches many of the lowest emotional places we as people find ourselves, names them, and speaks to them with honesty and optimism. Their driving old-time banjo performances have been described as both fresh and timeless, displaying that traditional tunes remain just as relevant today as they have ever been. You’ll hoot, you’ll cry, you’ll holler, and you might even get to laugh a bit too. Charlie’s got three albums you can check out just about wherever you listen to music.

Three Female Writers who enjoy Tea, Cake and Murder Ballads have conspired to enjoy these things together. Offering authentic original auditory experiences and visually stimulating scenes whilst harmonizing and playing a combination of American folk and eastern European noises together. The Barn Swallows can be found wherever barns can be swallowed.
Jessica Fleet, May Edington and Aurelia Cohen