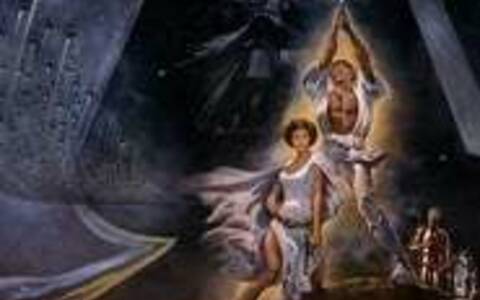 *This is the “Special Edition” of Star Wars: A New Hope, the only version of the film available for theatrical presentation.

A long time ago, in a galaxy far, far way, a young filmmaker named George Lucas created a thrilling science fiction adventure that captured the imagination of the world and changed cinema forever. In the original 1977 blockbuster Star Wars, the young Luke Skywalker begins a journey that will change the galaxy. Nineteen years after the formation of the Empire, Luke is thrust into the struggle of the Rebel Alliance when he meets Obi-Wan Kenobi, who has lived for years in seclusion on the desert planet of Tatooine. Obi-Wan begins Luke’s Jedi training as Luke joins him on a daring mission to rescue the Rebel leader, Princess Leia, from the sinister clutches of Darth Vader and the evil Empire. With the help of rogue pilot Han Solo, co-pilot Chewbacca, and loyal droids R2-D2 and C-3PO, Luke will meet his destiny … Inspired by Flash Gordon serials, WWII action films and Akira Kurosawa’s The Hidden Fortress (among other things), Star Wars is an all-time classic that, like The Force itself, will be with us always. (Dir. by George Lucas, 1977, USA, 101 mins., Rated PG)