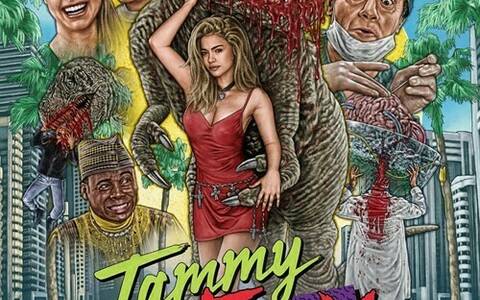 Get ready to get Jurassic at DINOSAUR DOMINATION MONTH, featuring prehysterical dino flicks guaranteed to stomp on your sanity and fossilize your funny bone!

Here is some pre-Valentine’s Day romance, Mondo-style, with the greatest “High School Cheerleader meets Animatronic Dinosaur” love story ever told!
Prepare to witness the best movie ever made about Paul Walker’s brain getting placed inside an animatronic dinosaur when the long-lost ‘90s cult classic Tammy and the T-Rex, newly restored to its original bloody form in this infamous “Gore Cut,” stomps into The Loft Cinema! From the not-so-acclaimed director of Mac and Me, Tammy and the T-Rex stars Denise Richards as Tammy, a high school cheerleader whose boyfriend Michael (Paul Walker) is attacked by a gang of teens punks who leave him for dead (and to be mauled by lions in a wildlife park). After a series of bizarre events, the mad scientist Dr. Wachenstein (Terry Kiser, Weekend at Bernie’s) finds Michael’s corpse and transplants his brain into a giant animatronic T-Rex. With his new dinosaur body, Michael seeks revenge against his tormentors, all while hoping to rekindle his romance with Tammy. Much wackiness, gore and Denise Richards riding a T-Rex ensues. Originally filmed as a gooey gore-fest with impressive splatter by SFX guru John Carl Buechler, Tammy’s minimal release in 1994 was cut to a PG-13 rating, funneled straight-to-video and inexplicably marketed as a kid’s film. Now, this gonzo gem is fully-restored to its original gruesome glory and ready to make your jaw drop like never before! (Dir. by Stewart Raffill, 1994, USA, 90 mins., Not Rated)