Yor: The Hunter from the Future 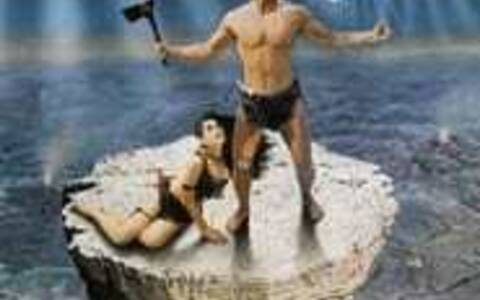 Get ready to get Jurassic at DINOSAUR DOMINATION MONTH, featuring prehysterical dino flicks guaranteed to stomp on your sanity and fossilize your funny bone!

“He is a powerful warrior from the future, trapped in a prehistoric land, battling for the survival of his people!” Yor, a smug, blonde, loincloth-clad caveman, romps through a hilarious series of silly prehistoric mishaps before eventually stumbling head-first into a bonkers Star Wars rip-off. Along the way, Yor fights dinosaurs, shoots lasers, romances a cavewoman, destroys several different cultures and drowns a few hundred women and children. And he’s the hero! One of the most legendarily bonkers Italian genre flicks of the early ‘80s, Yor: The Hunter from the Future stars B-movie hunk Reb Brown (Space Mutiny) as our titular hero, an overly-muscled, overly-confident cave dude with a surfer shag mullet and a perpetually stoned worldview. Yor is loving life, but he’s also got a problem – he’s starting to question his origins, thanks to a mysterious medallion he wears. When he learns of a desert goddess who supposedly wears the same medallion, Yor decides he must find her and learn his true identity, which somehow flings him into the future where he really flips his prehistoric lid! True cinematic insanity from the director of Killer Fish and Cannibal Apocalypse! (Dir. by Antonio Margheriti, 1983, Italy, in English, 88 mins., Rated PG)